Politics
"Land is a resource that needs to be protected for economic development." 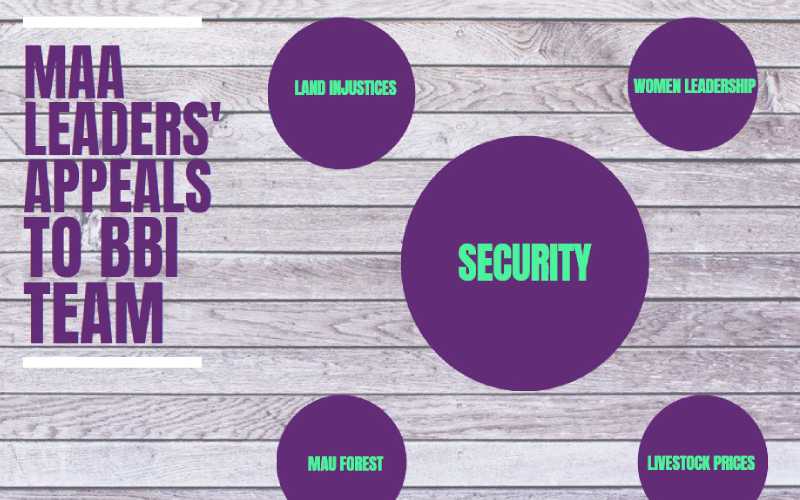 The Maa community has urged the Building Bridges Initiative to look for speedy resolutions into land issues. In resolutions read by Kajiado Governor Joseph Lenku at the opposition leader Raila Odinga-led rally, the community further praised the government for protecting the Mau Forest. He spoke at the Nakuru Stadium, which leaders said will be renamed Ole Ntimama Stadium.

KFS Board Chairman Mr Peter Kinyua noted that the admission is a great landmark and presents a great funding opportunity to complement government forest conservation efforts. Narok North MP Moitalel ole Kenta further reiterated that the Maa leadership has let down the community in pushing for its needs.  He echoed Lenku's calls for land historical injustices to be resolved, citing the Kedong Ranch. More than 30,000 squatters suffered a blow last November after a court declined to stop their eviction from a 76,000-acre land at Kedong ranch in Mai Mahiu. The government plans to build a dry port on the land.

The community is claiming ownership of land that is part of the vast ranch along the Maai Mahiu-Narok road, where a dry port and a special economic zone are to be set up. The proposal said land resources go beyond titling and ownership. The Kajiado governor said resources like parks and game reserves should help develop the community through revenue sharing. "Land is a resource that needs to be protected for economic development." Naisula Lesuuda added that the government needs to pay more attention to livestock, which is the community's mainstay. She said the attention given to coffee, tea and milk, should also be accorded to the pastoralist communities.

SEE ALSO: How virus stopped reggae and could change course of politics

Other than land, the leaders called for more involvement of Maa women, who are "more oppressed than anybody else". Lenku urged the BBI team to elevate the Ushanga Project and set aside a team, led by a woman from the Maa community, to manage it. "Let justice be our shield and defender in protecting our land and culture," he said, quoting the National Anthem. Security was also among the issues leaders from the Maa community want to be addressed. The security issue has been reported over a long time in the wider Rift Valley region.

Rift Valley Regional Commissioner George Natembeya in October last year said the Government would forcefully take the weapons from those who refused to surrender them. He said the disarmament exercise would have started in September, but an African Union resolution had declared it to be an amnesty month. The administrator said the exercise to forcefully disarm residents of Elgeyo Marakwet, Baringo, West Pokot, Turkana, Samburu and Laikipia Counties would start.