Whistleblower doctor is warned 'you'll be punished' before dying of coronavirus

The whistleblower doctor who attempted to warn the world about coronavirus was told by Chinese police he would be "punished" if he continued his campaign before he died. Doctor Li Wenliang was sent a chilling letter by police ordering him to "repent" and describing his releasing information to colleagues as "illegal activity" - with the authorities desperate to keep the spread under wraps.  The 34-year-old died on Friday after contracting the virus from patients he was treating in Wuhan, but was one of eight people police were investigating at the time for "rumour-mongering", reports the Sun. The coronavirus death toll has risen to more than 1,000 on Monday, with a further 103 people having died in 24 hours in the epicentre of the deadly disease, adding to the 909 already confirmed.

In the letter, the police wrote: "If you insist on your views, refuse to repent and continue the illegal activity, you will be punished by the law. Do you understand?" Dr Wenliang, an ophthalmologist at Wuhan Central Hospital, had told colleagues through a messaging platform about the initial spread of the disease, at that point seen as mysterious pneumonia, on December 30. Writing in a WeChat group which contained around 150 other medics, he said: "Seven confirmed SARS cases were found in Huanan Fruit and Seafood Market." "[The patients] were in quarantine in the Houhu Branch of our hospital," he added. One of the other medics responded: "So frightening” and then asked about the 2002-2003 China SARS epidemic which saw 800 people die. 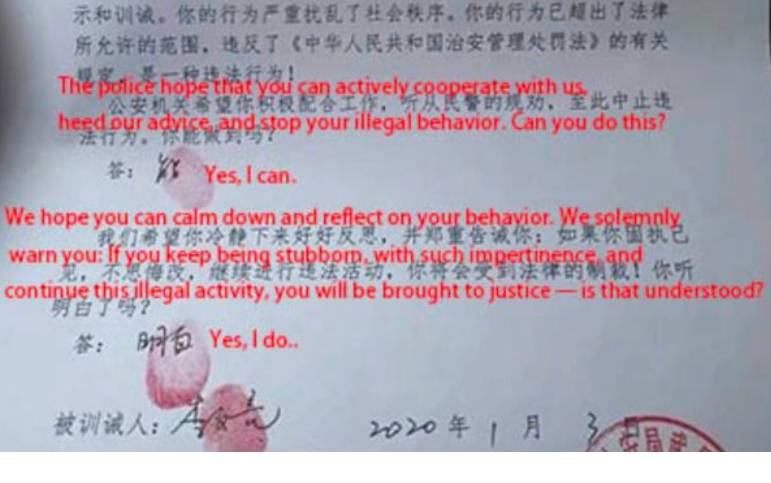 "Is SARS coming again?" Dr Li was then brought before officials from the health authority in Wuhan in the middle of the night, wanting to know why he was providing his colleagues with such information. And three days later the police made him sign a statement about his "illegal behaviour" with the Chinese authorities still trying to keep the severity of the virus under control. The letter came to light after footage emerged of suspected coronavirus sufferers being rounded up and taken to camps in Wuhan in the early stages of the epidemic.

Dr Wenliang was given permission to go back to work as the infection quickly spread through the city, putting massive strain on the healthcare system. On January 10 he told the world he was developing a fever through social media site Weibo and by the end of the month he was officially diagnosed before dying last week. The Chinese authorities had threatened anyone spreading "rumours" online with up to seven years in prison. Amnesty's regional director, Nicholas Bequelin, said: "Chinese medical professionals in China tried to sound the alarm over the virus. "Had the government not tried to minimise the danger, the world could have responded to the spreading virus in a timelier manner. "Censorship, discrimination and arbitrary detention have no place in the fight against the coronavirus epidemic. "Human rights violations hinder, rather than facilitate, responses to public health emergencies, and undercut their efficiency."

UAE to make history with launch of Mars probe

UAE to make history with launch of Mars probe

Boy, 15, dies of Black Death in Mongolia as alert goes out over bubonic plague

Boy, 15, dies of Black Death in Mongolia as alert goes out over bubonic plague

From the Moon to Mars: China's march across space

From the Moon to Mars: China's march across space