NHIF should always work towards helping poorest Kenyans get care 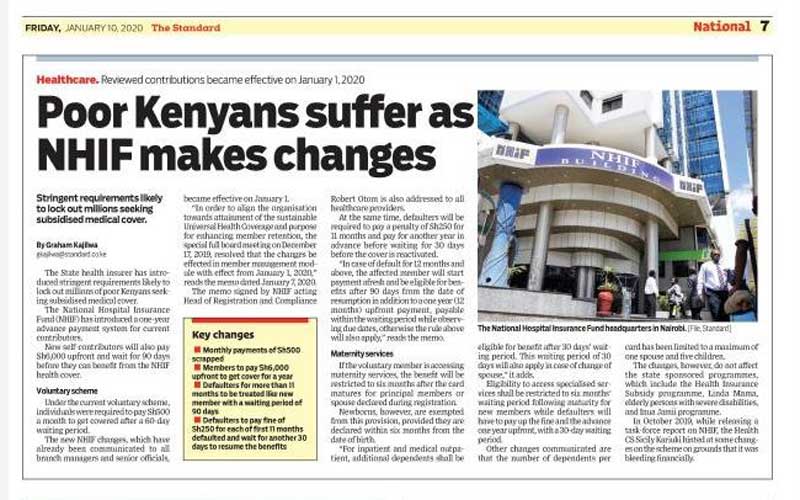 The National Hospital Insurance Fund (NHIF) is in the spotlight again and for the wrong reasons. The national health insurer, which should be the best resort for the common man on health financing, finds itself in the eye of a storm following a move that has rattled the same people it is supposed to benefit. With a paltry 20 per cent of the population covered by the fund, most of them from the formal sector, still a huge chunk of the population remains uncovered and exposed. Majority Kenyans are just one sickness away from poverty. With this reality in mind, the least that should happen is that the public health insurer should be robust and proactive. It does not inspire confidence when the fund seems to be mistreating those paying up the premiums. Most Kenyans have fallen on tough economic times in the past few years, and this worsens the fact that they cannot afford medical care. With NHIF’s new rules aimed at contributors and their dependents, there is a likelihood that most Kenyans, especially those in the informal sector, will be discouraged from joining the fund. It is not rocket science to realise that most of those in this sector live from hand to mouth, thus forcing them to pay in advance and then having to wait for another month for service, is defeatist.

This is coupled with the new requirement that penalties will be levied on defaulters. Question is, where would a person struggling to meet basic needs get the extra money in an ailing economy? While the move cannot be dismissed entirely for some intentions such as punishing employers who fail to remit contributions from their employees, it still works to further push out of reach from many quality, sustainable health financing. NHIF must not appear like it is punishing its own contributors. The government must make a conscious decision to make NHIF work for every citizen if it envisions a healthier nation. This is not too much to ask for. The Universal Healthcare Care (UHC) dream can be achieved if only NHIF and other stakeholders step up their game and work towards helping the most vulnerable and low income earners in the country.