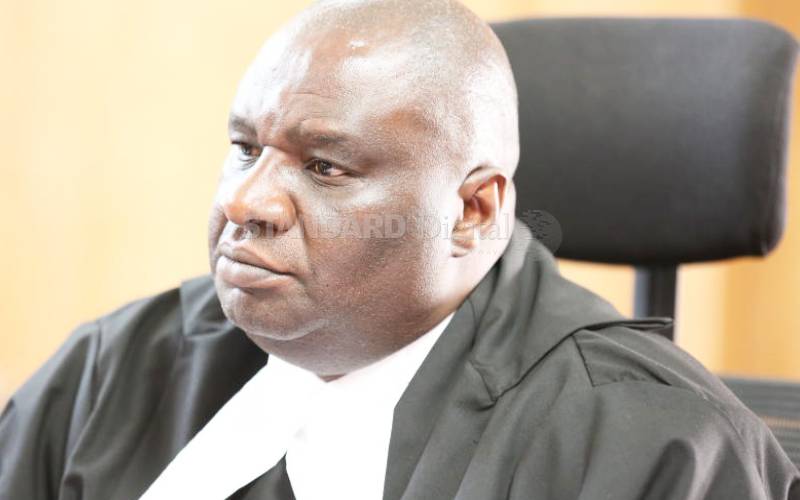 Court of Appeal Judge Otieno Odek (pictured) died as a result of a blood clot on his right leg, postmortem results show. Two pathologists conducted an autopsy as questions still remained over what caused the clot. Chief Government pathologist Johanssen Oduor said the judge had a clot in the vein in his right leg which blocked an artery. The autopsy took several hours in the morning as family members and detectives waited patiently. When the pathologists came out, they briefed the family about the cause of the death with Oduor saying sitting for long hours could have contributed to the clot. Oduor noted that blood clot in the leg may also have been caused by lack of exercise. At the time of his death, the judge had a full in-tray with a dozen high-profile cases, some of which were due for judgment this week. The day his body was discovered, his colleagues, Justices Asikhe Makhandia and Patrick Kiage, had arrived at the Court of Appeal and had been waiting for him to proceed with court matters. Justice Odek's body was found in his apartment in Kisumu. It is suspected he may have died at the weekend. He was 56. His driver who had gone to pick him up in the morning could not reach him on phone. On checking his house, he found the door locked from inside even though his official car was at the parking yard. After reporting the incident to his seniors, who in turn engaged area police, the door was broken into, only to find the body on his bed. Last week, a planned autopsy on the body was called off following an intervention from the DCI who advised that the process would not continue without a government pathologist. His family, led by his elder brother Yonah Odek, told The Standard they are yet to deliberate on the post-mortem results but are in the final stages of preparing for the burial. Yonah said the report was given to the detectives who will also finalise the report. “We will remove the body of my brother on Thursday from the mortuary after which we will bury him on Friday,” said Yonah. His death has been a subject of debate with detectives launching a probe on the matter. Already, two guards have been questioned over the death. The guards, from a local private security firm and whose identities were withheld by the police, are said to have been on day and night duties, respectively, during the weekend when the Court of Appeal judge reportedly died. Several detectives camped at the Aga Khan Hospital mortuary as they joined the family to wait for the autopsy results.