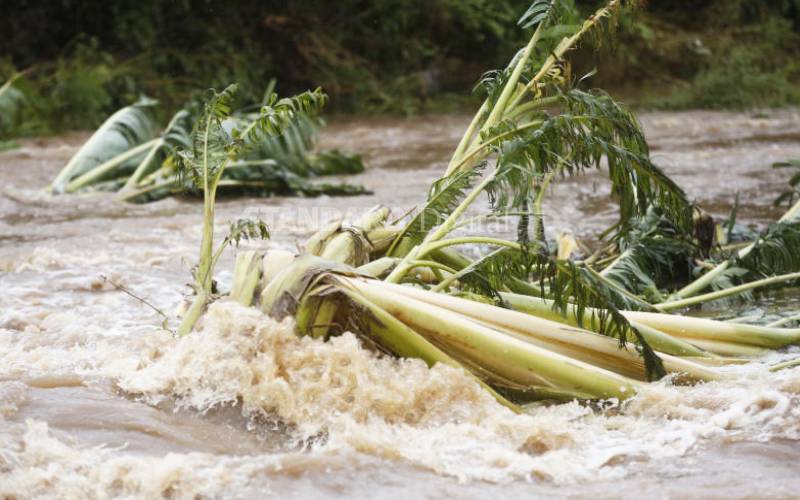 They say rivers are like elephants: they never forget their original path, no matter how long it takes.  And when they return, they do so with a vengeance - just ask those that had encroached on river  banks. With the growing population and demand for land, humans have been encroaching on dry riverbeds for years.

Then the rains came, and erstwhile dry riverbeds have roared back to life, reclaiming their robbed routes with a vengeance.   As rains continue to pound most parts of the country, the number of people affected by floods has been rising by the day with those who had encroached on riparian lands paying a heavy price.

Three rivers: River Molo, Rongai and Ndarugu in Nakuru County have reclaimed their original paths, sweeping through settlements and farms that had encroached on their routes. Last week, Molo experienced one of the most devastating flooding in more than a decade. This saw River Molo burst its banks, displacing scores of families and leaving a trail of destruction in its wake.

According to Charles Njenga, a former civic leader, most of the submerged houses had been built on riparian land, which had over time dried up as the water table went down and River Molo shrunk to a few feet wide. “The swamp covered a vast area in the middle of the town. The swamp dried up and volumes of water in the river reduced. This gave way to houses on either side, too close to the river. Some houses were standing on the riverbed,” said Njenga. A design for a four-storey building adjacent to the river had to be changed during its construction after it started sinking in 2010. Behind the commercial and residential buildings, some residents ran winding nursery beds on which they grew vegetable and tree seedlings.

Then the river returned. “There had been serious interference with the natural course of the river. After the heavy rains ,the storm water was obstructed. The river, while seeking its original path, submerged the establishments and washed away the nurseries,” said Njenga. For two days, the flood waters cut off transport between the main stage and Posta, marooning scores of houses and businesses. River Rongai, which had equally shrunk over the years also returned to maroon the entire Burgei trading centre, which had eaten into its path.

After the heavy rains last week, at least 200 families were displaced after River Rongai broke its banks. They ended up at a camp in Cesarina Secondary School. The river also swept through tomato farms dotting its banks. According to area Deputy County Commissioner Julius Kavita, the situation was aggravated by poor farming practices that saw farmers cultivating too close to the river.  And when the rains came, the river demanded its right of way. “We urge those conducting any human activities within the riparian areas to keep off. Encroachment worsened the situation leading to acres of tomatoes being washed away. Such losses could have been avoided,” said Kavita. Rongai MP Raymond Moi warned residents against encroaching on river banks saying this was endangering lives.

“There is nothing that one gains by moving too close to the river. These are people bringing problems to the government as those affected call for evacuation. The magnitude of the current crisis would not have been this devastating,” he said. At the beginning of December, River Ndarugu, which originates from Njoro, also burst its banks at the lower end of Kwa Rhonda slums threatening to submerge some of the houses in the area. One of the major bridges connecting the slum to Barut village was completely submerged. The water levels reached close to the perimeter walls of nearby homes causing panic among residents. “The danger is imminent. The houses are too close to the river. Sometimes it rains in Njoro and those downstream are not aware. When the floods hit the area people were asleep. Should the water levels rise people and property will be washed into lake,” said Joel Amboga, a resident. County National Environmental Management Authority director, Antony Saisi promised to respond on what his department is doing about the matter later.