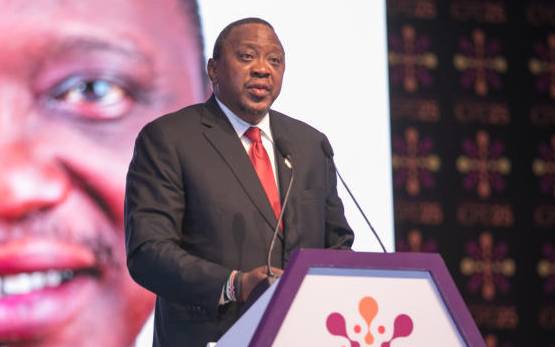 It has now emerged that President Uhuru Kenyatta (pictured) has instructed governors in Mt. Kenya region to take immediate measures, political and executive, to ease cash squeeze within their counties pending the national government action-plan that is expected to result into a nation-wide targeted stimulus package. Top among those measures instructed governors to take is the immediate payment of all pending bills and others that have accrued from the ongoing projects. Governors are also expected to fast-track projects that directly relate to trade and agriculture to avoid slowing business cycle within the countries. Payment of the pending bills is seen as a quick win in injecting cash into the battered rural economies that have suffered a series of misfortunes from pricing volatility of tea, coffee and milk. The National Treasury breakdown shows that 7 out of the 10 countries that form the greater Mt. Kenya region are yet to pay their pending bills in full.

Current governors have in particular delayed payment of bills accrued from the previous administrations. Instead, it has emerged that some governors have prioritized paying bills accrued during their administrations, on allegations that they are doing that to reward their supporters who were favoured in the last round of tender awards.  Pending bills Kirinyaga, Tharaka-Nithi and Kiambu have not paid any pending bills, according to a list released by The National Treasury. Meru, Nakuru, Murang’a and Embu were found to have “demonstrated some eff orts towards payments of their pending bills though are yet to fully comply”, Treasury noted. Uhuru’s directive to the governors relates to the memorandum that governors gave to the president during the Sagana State Lodge meeting two weeks ago. While it sought ways to revive the economy, the president wanted the governors to implement some of the quick wins to soften the hard times.  One of the governors’ official who is privy to the meeting told Mt. Kenya Star that the president was receptive of the memorandum, but told governors to remember that they, like him, are responsible for the government, albeit at the local level, and must also been seen to take actions that will grow the economy in their respective counties.

The president commended the governors for steps already taken to identify priority areas that require a collective development focus under the Central Region Economic Bloc. The president also agreed to have a meeting with the governors where discussions will be exclusively focused on the economic revival. According to CEREB chairman Nyandarua County Governor Francis Kimemia, the memorandum addresses the issues of poor and volatile milk pricing, measures to take on coffee and tea sectors that also face price fluctuation issues, modalities to promote local consumption of cash crops and steps to be taken by the governors, with support of the national government, to attract foreign investors at the devolved level. The follow-up meeting that was expected last week has however been postponed as the president was involved in the launch of the Building Bridges Initiative (BBI) report. However, several governors did meet while others sent their representatives to a meeting that is understood to have refined the memorandum ahead of the meeting with the president. In addition to the memorandum, the other key issue that came out of that meeting was setting of the timelines to consolidate the CEREB and start joint projects as agreed during its formation. “It is critical that we speed up the regional development roadmap which will foreground regional issues in the national platform. And we are glad that President Uhuru Kenyatta has agreed to our proposal,” said Kimemia after the meeting.

Governor Kimemia had earlier told Mt. Kenya Star that the 10 CEREB counties had ratified the regional plan which among others involves setting up different industries in different counties, processing different commodities in a move aimed at avoiding duplication and ensure maximum use of resources. “We have come up with projects that are very major and that are specific to counties, and which can be shared with other counties,” said Kimemia. “We have agreed that you cannot put the same factory in Embu, another in Nakuru and another in Meru even though they produce potatoes. We leverage with the one in Nyandarua as a bloc project. When it comes to each crop, we agree on where the factory will be established.” He said they has also agreed to have a common taxation within the bloc so that if one is transporting goods from Nakuru to Meru, the cess they pay in Nakuru is enough and will not have to pay the same in Nyandarua and Laikipia. Stimulus package The directive to the governors comes at a time when Uhuru is expected to reveal a sort of a stimulus package that will jump-start the economy and flow in the much needed cash. Generally, without adequate cash circulating in the economy, demand for goods and services reduces significantly, meaning that exchange of goods and services suffers, slowing the entire economy. One of the clearest signs for a stimulus package in the offing was the Cabinet’s decision to approve the Kenya Youth Development Policy (KYDP) 2019 during its latest sitting on November 21.  A State House brief noted that the policy is “focused on boosting the country’s economy and mainstream issues affecting the youth.” Significantly, on the same say, the government announced a Sh3 billion boost for Jua Kali artisans, to be given exclusive tenders for the manufacture of doors and windows for the ongoing State-sponsored housing programme. The State Department for Housing and Urban Development announced that it will buy 100,000 doors and 120,000 windows from Jua Kali artisans for the housing projects in Nairobi’s Starehe and Shauri Moyo estates. “We are giving the Jua Kali sector an opportunity to participate in the construction of houses for the Affordable Housing Programme…it is a big contributor to employment in the country,” said State Department of Housing Principal Secretary Charles Hinga.