Commentary
Against all the violence thrown at him, Gandhi refused to fight violence with violence. 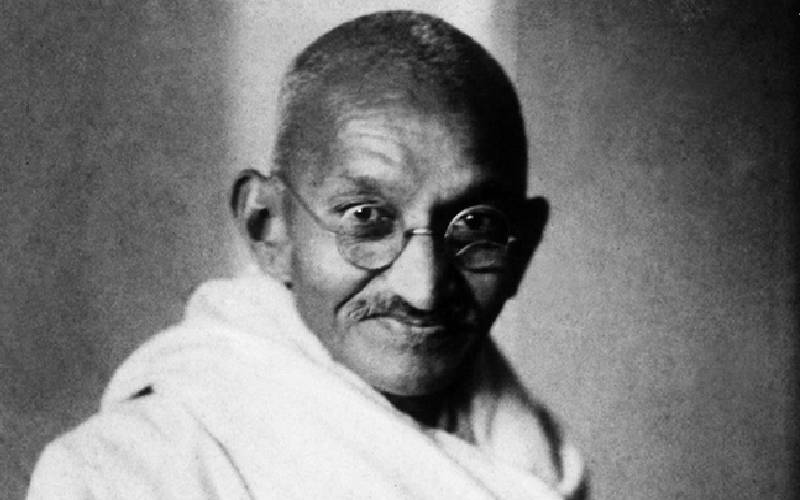 As a youth, I idolised Malcolm X. After reading Arthur Haileys ‘The biography of Malcolm X’  in Nairobi School, I made my colleagues read it too. The idea of a junkie, a pimp, a thief and a jailbird eventually rising to become an inspirational leader inspired me. Malcolm X still inspires me to this day. I have his portrait looking down at me pensively in my office. In university, I discovered Martin Luther King. His deep spirituality moved me. I don’t believe there is anyone who can listen to his speech “I Have a Dream’’ and  not be inspired. The 1980’s rolled in, and I discovered Nelson Mandela. I was part of the millions that agitated for Nelson Mandela’s freedom. I also discovered Mahatma Gandhi. More surprising is the common thread that intertwines these three icons of our modern history and how the diminutive man from India made such a huge impact on them and on Africa. This month as the world celebrates his 150th anniversary, the moral, political and economic issues that Gandhi spoke about are still relevant and his ideas still challenge us. Gandhi was born on October 2, 1869 in Gujarat, India. He came from a family of extremely modest means and struggled to become a lawyer. He was at best, an average man facing the same challenges that all young men struggle with; a good education,  a good job, the same worldly temptations  and hopefully some positive recognition – none of which came. In desperation, he accepted a job with an Indian law firm in South Africa. While in South Africa, he was thrown off a train for sitting in a first class couch reserved for ‘whites only’. African Movement With this humiliation, Gandhi realised that he could and would not accept the racial discrimination that was then prevalent in South Africa and started a campaign against it. He was beaten up and jailed numerous times but refused to give up. He fought back by refusing to comply with anything that he considered degrading. Against all the violence thrown at him, he refused to fight violence with violence. Thus started his strategy of ‘Satyagraha’ or non violent resistance. In a way, he was following in the footsteps of Christ with ‘turn the other cheek’ philosophy. A few years later he went back to India and started the campaign to free India from British rule. India’s independence was to be his greatest achievement. Years later, African politicians would comment that when India achieved its freedom in 1947,  their independence became a possibility and it is no coincidence that the Pan African Movement gained momentum after that. Neither is it a coincidence that many of Africa’s struggles for independence were non-violent movements. We have Gandhi to thank for that. Mandela was inspired by Gandhi and it is only after all peaceful means failed that Mandela reluctantly decided to fight. In the famous Rivonia trial speech, Mandela was at pains to show how the African National Congress exhausted all peaceful means and finally gave up. Same dilemma Martin Luther King challenged America to look into its Christian faith and in the end white people could not face the moral dilemma of police brutality and fierce dogs mauling young kids asking for their rights. At home, Raila using passive resistance forced the Government to talk without resorting to violence. In 2017, resistance achieved better results than the violence of 2008. Gandhi campaigned for social justice and to empower the poor people. He advocated an economic policy of encouraging small-scale farmers and artisans rather than industrialisation. Today in Kenya, we struggle with the same problem. Like Gandhi, we too see the need to empower our youth and small-scale farmers; what we call the Jua Kali sector, which is the largest employer. We too face the same dilemma that India faced 50 years ago. India chose the middle path and did both, supporting  industrialisation and and its Jua Kali. Today the Jua Kali sector in India is extremely vibrant and is the largest employer. Gandhi advocated an ethical approach to politics.  Even today the world still struggles with this. Samantha Powers, the former US Ambassador to the United Nations and Obama’s advisor, in her  book;  ‘The Education of an Idealist: A Memoir’ wrote of how Obama made  decisions based on self interests rather than what is right. The genocide in Rwanda (and many others)  would not have happened if the world had acted with its conscience. Finally, the most important lesson from Gandhi is that one man or woman can change the world. No matter how small or insignificant you think you are.  Winston Churchill derisively called Gandhi the ‘half-naked fakir’ but this crazy half-naked fakir broke the back of the British Empire. You too can change the world. You too can achieve greatness. This is Gandhi’s  gift to humanity, which is still alive 71 years after his death. Mr Shahbal is Chairman of Gulf Group of [email protected]