Driver of ex-Nyeri governor did not apply brakes during crash, inquest told 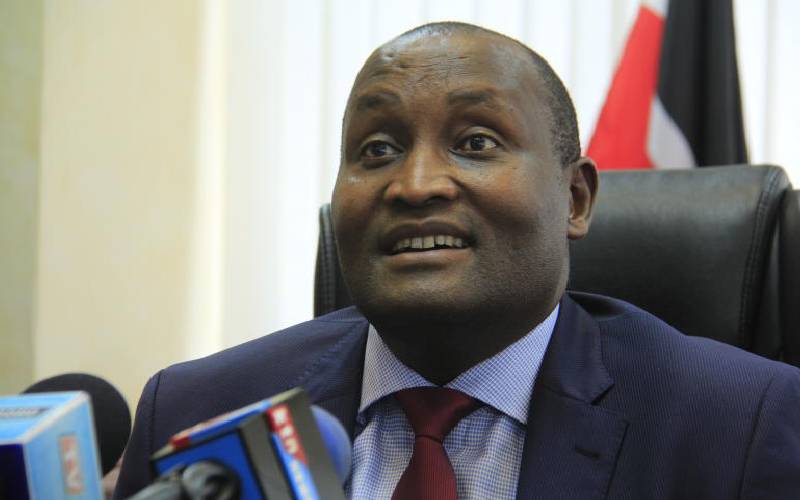 The driver of former Nyeri Governor Wahome Gakuru made no attempt to apply brakes to stop the vehicle from ploughing into a guard rail, an inquest heard yesterday. Dennis Ireri, an expert witness from the National Transport and Safety Authority (NTSA), told a Nyeri court there were no skid marks at the scene of the accident. Mr Ireri said he inspected the Mercedes Benz after the accident and found the braking system was intact, in good working condition and operational. Gakuru (pictured) died in the accident at Kabati along the Nyeri-Nairobi highway on November 7, 2017.

During cross-examination by Senior Assistant Director of Public Prosecution Peter Mailanyi, Ireri said he found no indications the driver tried to stop the Benz before the accident. “I did not find any skid signs on the road to show the driver attempted to stop the vehicle despite having checked for the same,” Ireri told Chief Magistrate Wendy Kagendo. The witness said that after analysing the extent of damage and how far the guard rail penetrated the vehicle, the driver might have been driving at over 120kph. This speed, he said, was more than the recommended 110kph on the highway. And this was on a day when the road was wet and slippery. Ireri said this could explain why the vehicle did not immediately stop despite ramming through a metal guard rail and concrete posts.

Continued accelerating He also said there was another possible scenario where the driver first hit three concrete posts and continued accelerating instead of applying the brakes. This scenario, Ireri noted, could help to account for the reason why the first three concrete posts were bent, but as the vehicle ploughed deeper into the guard rail, it flattened five more posts. “It bent the first three and flattened five more, indicating that the vehicle was at high velocity, hence the extent of the damage,” the witness said. Mr Mailanyi also asked Ireri whether it was possible the airbags on the passenger side of the vehicle could have deployed after the accident instead of during impact. Previous witnesses had told the inquest that the airbag on the governor’s side had failed to deploy while that on the driver's functioned as intended. But the NTSA official insisted that the front airbags on both sides of the vehicle deployed immediately on impact. Mailanyi and the family’s lawyer, Martha Weru, said that according to photos taken by a scene of crime officer, the airbag on Gakuru’s side had failed to deploy. Ireri, however, said that the airbag could have been interfered with by the rescuers. Meanwhile, the chief magistrate issued summons to two doctors at the Thika Level Five Hospital to appear in court and testify after there was confusion on who would take to the dock. The summons were issued to Joseph Wanjohi and Loise Mathini (who was an intern at the time), who are said to have attended to Gakuru before he passed on. Mailanyi had indicated that Dr Wanjohi would testify but instead the hospital sent Dr Maina Wachira who works in the medical legal unit.