Kenya
Senators dismiss tabling of the Budget estimates and Appropriations Bill before the National Assembly without the Division of Revenue Act in place. 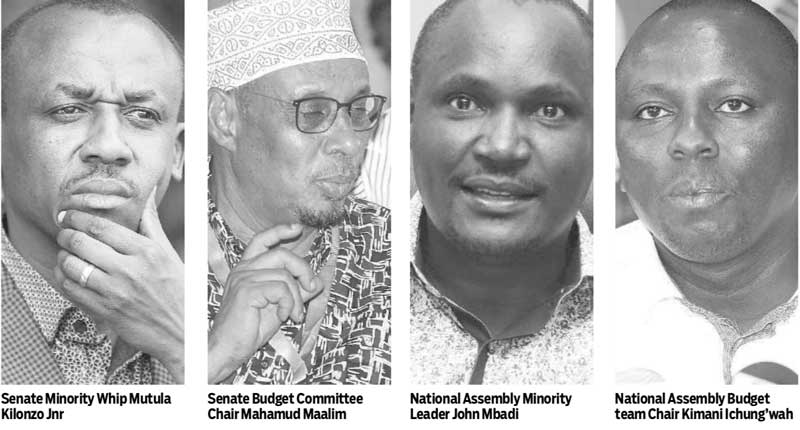 Senators have admonished their National Assembly colleagues over the collapse of the proposed legislation that shares national revenue among the two levels of government. The senators rubbished the tabling of the Budget estimates and Appropriations Bill before the National Assembly without the Division of Revenue Act in place as stipulated in law.  “We were treated to condescending attitudes. We were given nursery lectures about our mandate,” said Senate Minority Whip Mutula Kilonzo Jnr.

The Senate wants the county governments’ equitable share to be Sh335 billion instead of the Sh310 billion presented in the Budget estimates. “We left the meeting. We walked out on them. The Bill was defeated. The President signed into law the Appropriation’s Bill and the Division of Revenue Bill was published afresh,” said Kilonzo. Senate Finance and Budget Committee Chairman Mahamud Maalim, who co-chaired the mediation talks with his National Assembly counterpart Kimani Ichung’wah, warned that Kenyans should not be misled that the defeated Bill will only affect counties. “This is a crisis for the country as a whole. Without the Division of Revenue Act in place, there is no way the national government can appropriate funds when the counties are denied the privilege,” warned Maalim. Narok Senator Ledama ole Kina said the Commission of Revenue Allocation (CRA) looked at average inflation for the last three years and proposed additional Sh21.7 billion for counties, which brought the figure to Sh335 billion. “They stuck at Sh316 billion and we said no. It was ridiculous as we expect counties to be properly resourced to perform functions assigned to them,” he said.

SEE ALSO: What new 'tyranny of numbers' can do

Fresh introduction National Assembly Minority Leader John Mbadi said the Bill collapsed and has to be introduced afresh. “We moved from Sh310 billion to Sh316 billion. The Senate climbed down to Sh327 billion. We could not bridge the Sh11 billion gap,” said Mbadi. Article 224 of the Constitution provides that each county government prepares and adopts its own annual budget and Appropriations Bill on the basis of the Division of Revenue Act passed by Parliament. The Constitution is silent on the time frame for the county governments of doing so. In absence of the Division of Revenue Act and the consequential County Allocation of Revenue Act, the county governments cannot prepare a budget.

In that case, the National Treasury would advance cash to county governments as an administrative tool to prevent county operations from halting to a grind. This has happened previously as various counties awaited the passage of the requisite annual Division of Revenue Bills. In such circumstances, the Nationally Assembly Speaker may have to waive the six-month window for reintroduction of the Bill that was initially defeated. Maalim called for reintroduction of the Bill.