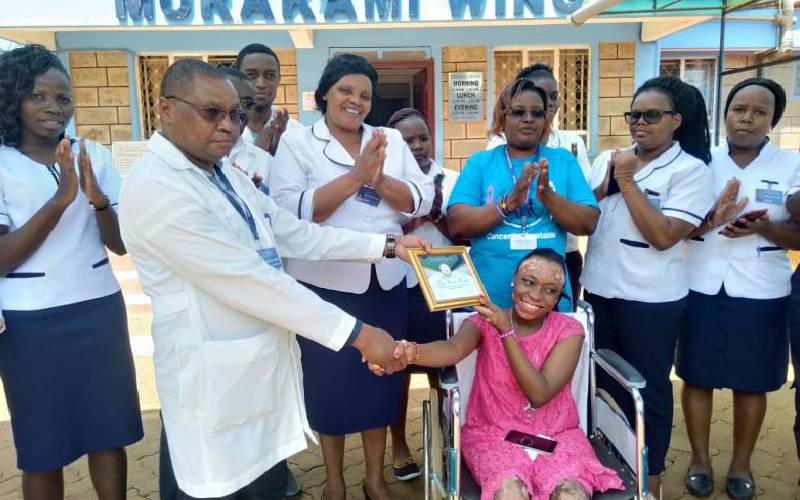 A Form Three student who sustained serious injuries while saving her disabled mother and a neighbour's child from a burning house last November has been discharged from hospital. It was an emotional moment for Irene Mumbi and staff at Tenri Embu Children Hospital as they parted ways on Saturday. Mumbi's heroic act almost cost her life and had her confined in hospital for six months. Her decision to brave the flames to save the two endeared hospital staff to her, some of whom shed tears of joy as Mumbi, whom they had gotten attached to, left the hospital. The hospital's administration and the medical team handed her a plaque containing a certificate of appreciation that stated; “For the fearlessness and the bravery you exhibited in saving your mother from a burning house”. Tenri's hospital’s medical superintendent George Kimani led Mumbi to a tour of the hospital as staff and patients sangs songs of praise. When she was wheeled to the hospital on November 29, Mumbi was bandaged from upper thighs to the feet and was in excruciating pain. Mumbi, a students at Temple Road Secondary School, sustained 18 per cent burns on her lower legs, arms, chest and face. Her legs were the most affected with third degree burns. This followed an inferno that broke out on the evening of June 6  last year at Blue Valley Estate in Nyeri Town suspected to have been caused by a leaking gas from a neighbour’s house. Irene, 18, managed to rescue her mother from the fire but when she went back to get her mum’s crutches, her clothes caught fire. As she fled, she heard a child crying in the next house and went back. She rescued him but sustained more burns. Unfortunately, the six-year-old child later died from injuries. “I look forward to the day I will walk again, resume school and help my mother. I came here in pain and on the verge of giving up but I’m now happy the pain is no more and the future is bright,” said Mumbi. Dr Kimani described Mumbi’s recovery as 'long and tedious'. Her medical bill came to Sh3.5 million. The hospital waived Sh1.3 million while the rest was paid by well-wishers.