Daggers drawn as elders back Buzeki move to join CCM 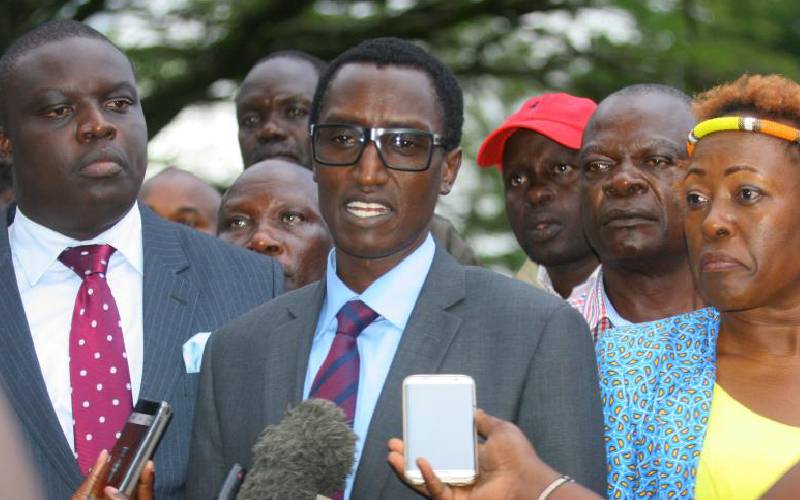 The move by Uasin Gishu businessman and politician Zedekiah Bundotich (pictured) to join Chama Cha Machinani (CCM) has ignited ethnic alignments in the Deputy President Dr William Ruto’s political base. Mr Bundotich who is popularly known as Buzeki and previously perceived as a close ally of Dr Ruto declared his decision to join the Isaac Rutto-led CCM last week, a move that set tongues wagging, exposing the soft underbelly of the Jubilee Party unity. The elders who met at an Eldoret Hotel to chart a political path for the Keiyo community living in Uasin Gishu criticized Jubilee leaders who have been castigating Buzeki since he declared interests to join CCM, terming them as non-performers.

An elder Philip Kipkosgei told the media on the sidelines of the daylong meeting that Buzeki is a development-oriented politician who should be supported to turn around the fortunes of Uasin Gishu County. Mr Kipkosgei said the Keiyo community in Uasin Gishu has resolved to support Buzeki’s disassociation with Jubilee leaders which the elders accused of lacking development agenda for the most populous North Rift County. “It is within his (Buzeki’s) democratic right to join a political party of his choice. We will support him regardless of the political party he joins. He owes no one an explanation for dissociating himself with Jubilee,” Mr Kipkosgei said. He claimed that Mr Buzeki, who is also the board chairman of Chemelil Sugar Company was allegedly bullied by Dr Ruto allies while he was still in Jubilee. The shrewd businessman cum politician contested for the Jubilee Party ticket for the Uasin Gishu gubernatorial seat but was defeated by incumbent governor Jackson Mandago.

He contested the results and contested the seat as an independent candidate, but lost again to Mr Mandago in the general polls. “As a community, we are not party to his choice of political party but we support as an individual. We have also agreed to support him he joins the gubernatorial race in 2022,” said Mr Kipkosgei. According to a source, the Keiyo elders are set to meet their Nandi counterparts to chart the county political direction in a series of meetings in Eldoret this weekend. Kanu Rift Valley coordinator Paul Kibet, who is also from the community called for peace among several communities living in Uasin Gishu. Mr Kibet claimed that Mr Buzeki was threatened by some arrogant Jubilee politicians who saw him as a threat to some candidates from the ruling party in 2022.

“We shall talk to our community to understand what informed Buzeki’s decision. We are aware he was threatened by certain individuals in Jubilee, forcing him to seek an alternative party,” the Kanu coordinator said. He hinted that CCM might form a coalition with Kanu ahead of the 2022 general elections. “Many things will happen in the political landscape before 2022. There will be several coalitions and realignments,” he said. Buzeki was last week scolded by a section of Jubilee leaders from the North Rift region led by Soy MP Caleb Kositany who said Buzeki’s move to join CCM is inconsequential. Mr Kositany is reported to have claimed that BUzeki would not win the Jubilee party ticket in 2022 because top party officials do not want him in the party. Mr Kibet said the Keiyo community believes Buzeki will help in the recovery of a 100-acre prime land belonging to Keiyo teachers, and which is alleged to have been grabbed by powerful individuals in the Jubilee Party. Another elder Chemoni Kimimin said Buzeki proved that he had capacity to steer the county after he helped maize farmers secure fertilizer earlier this year when the Jubilee administration failed to procure subsidized fertilizer for them this year. In February when it became apparent that the state was not going to import fertilizer for the 2019 planting season, Mr Buzeki struck a fertilizer importation deal with a multinational company - Export Trading Group (ETG) that saw farmers get fertiliser at Sh3,000 per 50-kilogram bag. Mr Buzeki said his move to join CCM will be unveiled officially in a ceremony to be presided over by party chairman and former Council of Governors chairman Isaac Rutto and a host of MPs and some Governors from the Rift Valley region. “We shall be issuing a clear direction that will redefine the politics of our region during the grant ceremony that will be presided over by our chairman,” said Mr Buzeki. He told politicians from the region who have expressed interests to run for President in 2022 to ignore his political decision at their own peril, claiming he (Buzeki) and like-minded leaders who are not part of the two Jubilee factions – Tanga tanga and Kieleweke control two million votes and will have a say in who becomes the next commander-in-Chief.