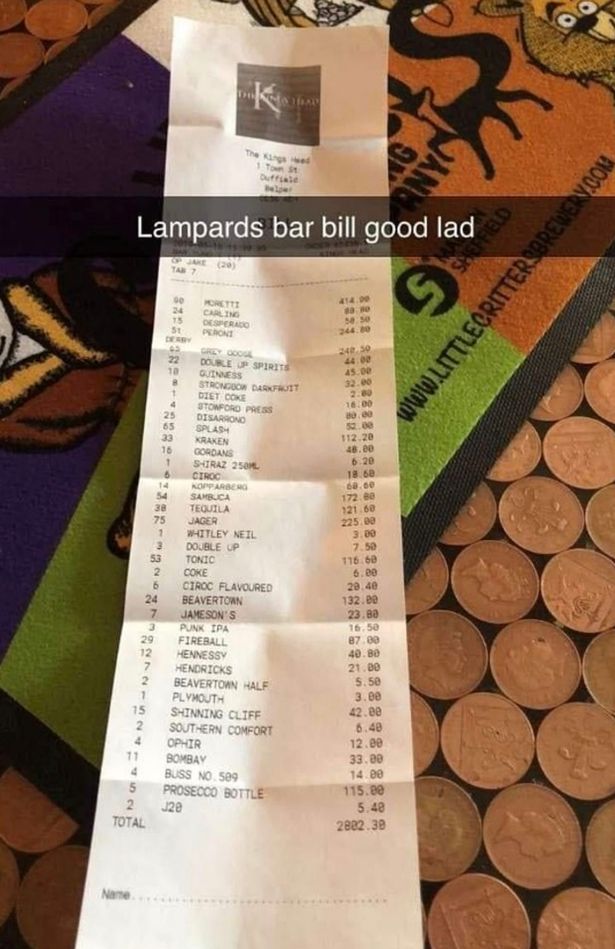 Frank Lampard and Derby stars 'rack up Sh358, 680 bar bill' after reaching Wembley Frank Lampard and his Derby players reportedly racked up a bar bill of over Sh358, 680 (£2,800) as they celebrated their place in the Championship play-off final. Derby will take on Aston Villa at Wembley following an impressive 4-2 win at Leeds in the semi-final second leg.

Lampard and his players celebrated wildly on the Elland Road pitch before travelling back to Derby, where they congregated at the Kings Head pub in Duffield. The pub uploaded a video on Facebook of Lampard and his Derby players celebrating as they chanted the club's 'If You Don't Bounce' terrace song. The Chelsea legend appeared to leave his players to continue their party but only after seemingly racking up the hefty bar bill. A picture appeared online of a bill from the same venue and date, totalling a staggering Sh358, 680 (£2802.30). It has not been confirmed that the Derby contingent spent the money, but the photo of the receipt was captioned with 'Lampard's bar bill good lad'.

The receipt shows a staggering 209 beers were purchased, alongside shots of Sambuca, tequila and Grey Goose vodka. Other purchases include five bottles of Prosecco, 75 jager bombs and 29 fireballs - while others took it steady with Diet Coke and J2O. Lampard raced onto the pitch at full-time against Leeds as his side got his revenge on Leeds and Marcelo Bielsa. Leeds had beaten Derby on the previous three occasions this season with the earlier league match overshadowed by the 'spygate' incident. But while his players celebrated on Wednesday night, Lampard was insistent his side had not finished the job.

"Listen we’re not there. I’m a bit worried because I watched Villa do this last night. But the players deserve this," he told Sky Sports. "There is work to do though. This isn’t the end of the celebration.” Derby and Villa will meet off at Wembley on May 27 with a place in next season's Premier League up for grabs.