I was so rich, I could have owned Ruaka - sugarcane seller

Nairobi
Nelson Kariuki, now a peasant pagan, does not allow women near him.

Nelson Kariuki sells sugarcane in Kiambiya and Ruaka towns on the outskirts of Nairobi. He has two regrets in life: Wasting his once fabulous fortune on women and alcohol and his mother rejecting Mbiyu Koinange’s marriage proposal. To date, Kariuki, 73, hates women with a passion. And bars too which he terms a den of man eaters. The late Mbiyu Koinange was the first Kenyan to earn a university degree and later became a powerful Minister of State in the government of founding President Mzee Jomo Kenyatta. Mbiyu loved Kariuki’s mother, but she had hots for a jigger infested farmer from Gatanga in Murang’a County, a turn of events which has tormented him for years.

SEE ALSO: I had my first drink with my dad and didn’t stop

“My mother was born here and the adjacent land belongs to the Koinange family so one day Koinange proposed to my mother but she declined because she loved my father who hailed from Gatanga. He had jiggers but she chose him. It torments me when I imagine that I could have been Koinange’s son if she agreed to marry him. Right now I would be stinking rich!” says Kariuki. Mbiyu Koinange died in 1979, but his personal wealth was, according to court documents related to long running inheritance battles, estimated at Sh10 billion. The Two Rivers Mall in Ruaka town sits on 100 acres which was sold by the larger Koinange family to Centum Investments for Sh1 billion. But he also had a chance to be rich on his own right through his forays in business in the early 1970s when blowing over Sh100, 000 in one session was no big deal for him.

SEE ALSO: I had my first drink with dad and didn’t stop

Had it not been for women, Kariuki says he could be the owner of Ruaka since when he was loaded like a gun, an acre cost Sh200. Today, an acre in Ruaka costs millions. “I was the first man to buy a bicycle in this village in 1965. I used the bicycle to ferry goods from Nairobi to Mucatha and will never forget the day I was thrown out from the barmaid’s house when my supermarket and butchery businesses collapsed in Mucatha. She packed my clothes in a polythene bag and threw me out. I went to live in the city because of shame and many times I would eat rotten fruits in Marikiti market,” he recalls. The father of five who lives in an iron sheet room in Kiambiya village in Ruaka, Kiambu County adds: “I had built a vast business empire but women and alcohol destroyed my life. These parcels of land you see today could have been mine. The problem is that I never invested my money in land which cost Sh200 an acre and that’s why I say today I could be the owner of Ruaka if I did that”. By the 1970s when a Kenyan pound almost equalled a British pound in value, Kariuki was swimming in dough courtesy of the coffee boom at the time. “In 1973 I was doing very well and was one of the richest men in this area. Coffee business was very profitable back then and I made a lot of money importing coffee from Uganda. There was scarcity of coffee in the country because the coffee fields had been burnt so I saw a niche and within a couple of months money was not an issue. I would spend Sh150,000 with much ease because I was a friend of money and I felt the urge of buying nice things for women,” recalls Kariuki who rarely allows women near him.

SEE ALSO: I had my first drink with dad and didn’t stop- Ann Mathu’s battle with alcoholism

For spending on women, Kariuki says, “One day I woke up early in the morning and found that only aspirin and salt were left in my supermarket.” Women also infected him with diseases like gonorrhoea which was prevalent at the time and Kariuki recalls visiting “Casino on Kirinyaga Road to treat gonorrhoea and syphilis covered with a shuka and the doctor would tell us to line up before injecting us on the buttocks with a such a strong medicine that the moment it was administered, we collapsed and slept on the ground until we regained our conscious.” Kariuki says womanising led to his downfall and, “I vowed that I will never ever spend a coin on a woman apart from my mother and wife.” But his small sugarcane business and tea farm in Muranga brought him back to his feet again. 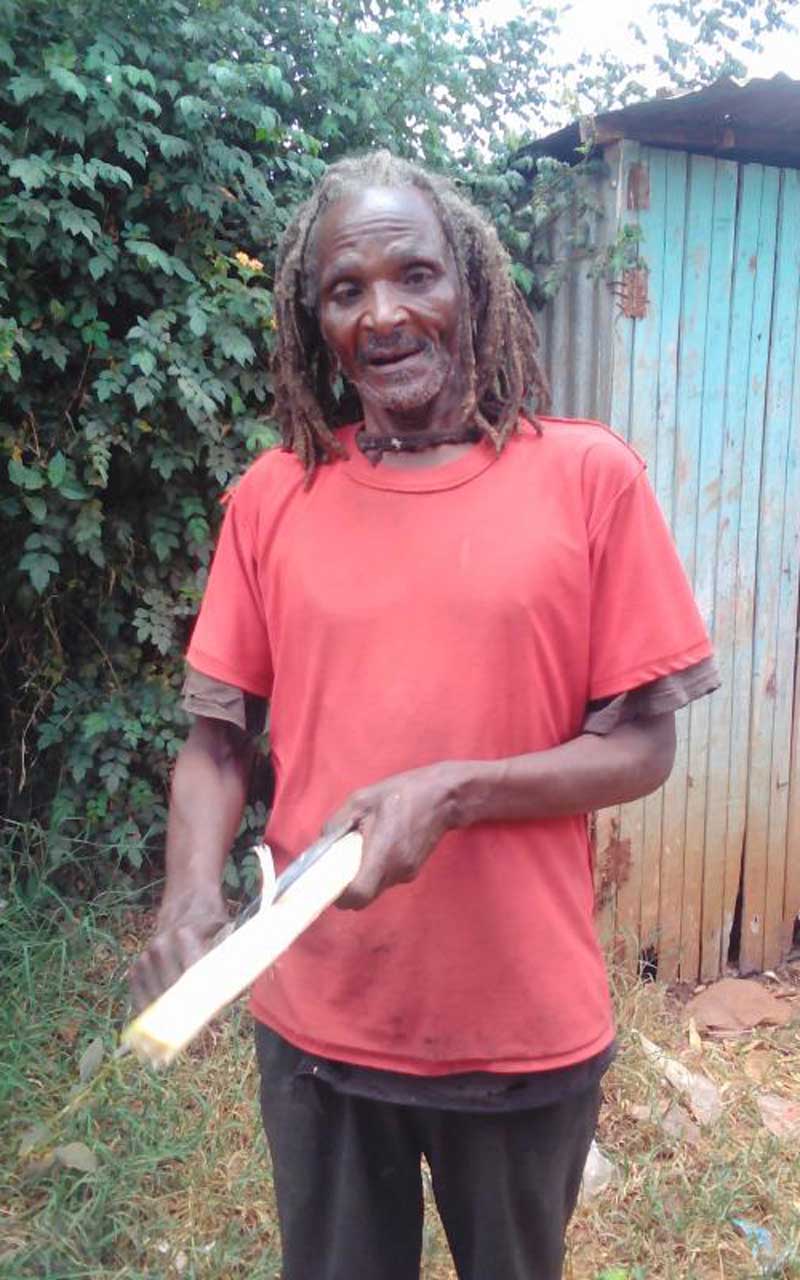 “The day I put on dreadlocks is the same day I started saving money. That was ten years ago and the reason I live in a mabati house is because I’m here to work. I travel to Murang’a each weekend to see my family and invest the little money I get in my businesses.” He adds: “Selling sugarcane is profitable because I have managed to purchase a piece of land in Gathanga and Oloitotok. I’m also a tea and coffee farmer in Muranga and a proud pagan.”