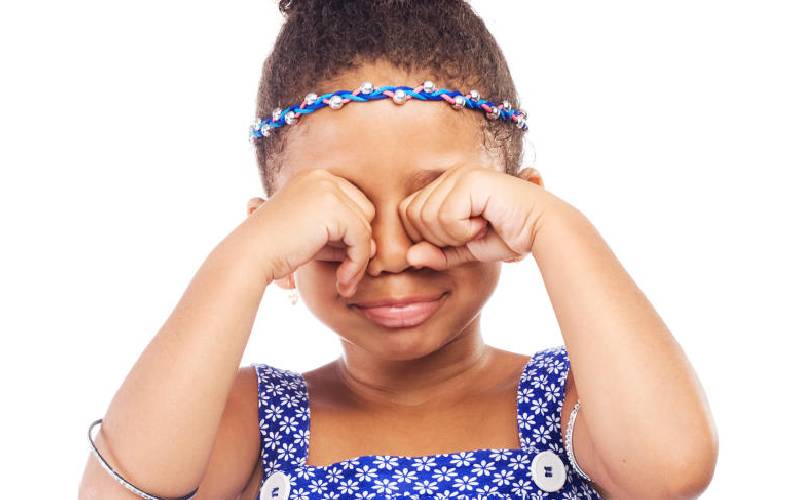 On March 5, at around 8pm, a young girl went through the most horrendous experience of her life. Her mother, a young woman who works hard to provide for her two daughters, had gone to buy lemon and ginger for her younger daughter, who was fighting a flu. In the meantime, she sent the nine-year-old Standard Four pupil to a green-grocer’s shop barely a minute’s walk from the block of houses they live in in Njiru, Nairobi.

As the girl left to buy vegetables for supper, two men who live in the same block of houses were waiting by the gate. “I think they heard me telling her I am leaving and decided to take advantage,” the mother told The Standard during an interview at their home in Njiru. The girl’s description of what happened next is as vivid as it is disturbing. “They grabbed me, tied a piece of cloth over my mouth so I could not scream and took me into their house.

“They blindfolded me and one of them held me down as his counterpart defiled me,” she said. According to the girl’s mother, none of the neighbours saw the men grab her daughter.

After they violated her, the girl said, she was let go with a warning. “They put a knife to my neck and threatened to kill me if I told anyone”. For days she held her tongue. She finally mustered up the courage to tell a female neighbour. The neighbour summoned one of the men, who, according to the girl’s mother, confessed that he had done something evil and needed help. The mother only came to know that her daughter had been defiled almost by accident, 10 days after the incident. “She was doing homework with her sister when she told me she was feeling pain in her genital area. I waited for her sister to sleep then examined her. Pus was coming out.” That is when the girl revealed that she had been violated. She also described the men and where they lived.

According to the mother, about five men had moved into the house recently and they were rarely seen because they left early and kept late hours. After a few days, the mother reported the rape at the Kayole Police Station. Officers were dispatched to the block of houses where they arrested two men after they were identified by the girl. According to her mother, the girl has not been the same since she was defiled. “Sometimes I talk to her and I can feel that her mind is somewhere else.” During the interview, her daughter valiantly fought back tears and constantly steadied her soft, shaky voice. “Sometimes I’m in class learning and I remember what happened. Then I ask the teacher for permission to leave class, go to the bathroom, take a tissue and just cry,” she said. Despite re-living the cruel experience, the girl exhibited resilience, and exuded strength and courage one would not typically expect from a child robbed of her innocence so callously. After the arrest, the mother said matters had taken a turn for the worse following death threats issued by the men. According to reports by residents, and a police officer working in the region who requested anonymity for her safety, defilement is common in Njiru and in some cases, the perpetrators kill their victims. Only a week ago, a resident told The Standard, the body of a 15-year-old girl was found next to a nearby river. The wounds on her body suggested she had been defiled before being killed. While the officer could not provide official statistics on the incidence of child rape in the area, she said that cases of sexual assault were extremely common especially during mid-term breaks and school holidays. “It is a low-income area so you find parents are always busy, struggling to provide for their children. They rarely have time to supervise or talk to their children. Rapists are aware of this fact and often take advantage of vulnerable families, such as those where mothers live alone with their children,” she stated. The source also indicated that police officers and the courts are overwhelmed by defilement cases, causing a backlog. She further revealed that the alleged rapists of the Standard Four girl were given bail of Sh300,000 each, adding, “I don’t know if they paid it or whether they are still in remand at Industrial Area. The case was just mentioned at the Makadara Law Courts but the trial will begin in August.”

After The Standard sought a comment from the police, a friend of the family alleged that the police cautioned them against speaking to the media, telling them “some matters are best kept on a low profile”. While the mother fears for her safety and that of her two daughters, she also worries that her daughter will not get the justice she deserves. She claims she was not informed of the bail hearing, although the police officer told The Standard it was just procedure and she would be called to court when she was needed. The fear of being silenced also looms over the mother’s head. She said that representatives of the suspects’ families visited her after their arrest, attempting to buy her silence. “They told me they will give me money to reimburse me for the expenses I incurred on medical procedures,” she said, adding, “I don’t want their money. I have struggled to raise this girl and no amount of money can justify what they did.” A medical report from Mama Lucy Hospital in Kayole confirmed that there was forced penetration although the hymen did not rupture. The family is now appealing for help to ensure the girl gets justice.