By Wachira Kigotho | 5yrs ago 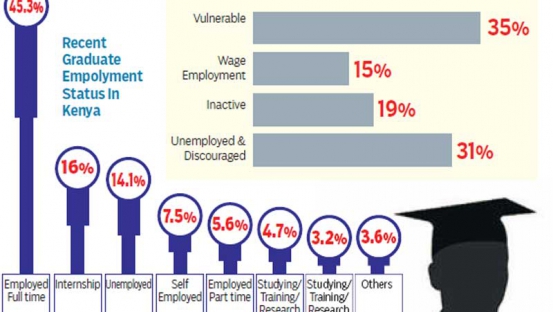 The aphorism that higher education is key to development could only be true if it created new knowledge, taught specific skills and promoted core values that held freedom, tolerance and human dignity in high esteem, says United Nations Educational, Scientific and Cultural Organisation (Unesco) in a policy briefing paper on the current demand for tertiary education globally.

Even in Africa, where on average the higher education gross enrollment ratio stands at about eight per cent, whereas there were only 0.7 million students in 2000, the number has increased to 20 million students, according to data sets gleaned from the Accra-based Association of African Universities. Notably, that had been the situation prevailing in Kenya, where enrollment in universities rose from 59,000 students in 2000/2001 academic year to the current number of almost 565,000 students.

Nevertheless, whereas new ways have been crafted to increase enrollments, Unesco’s International Institute for Education Planning says most governments are not keeping with the demand or meeting the basic criteria of providing higher education that would be a key element in the development process.

“Globally there are huge gaps between the rich and the poor in higher education, as only one per cent of the poorest complete at least four years of higher education,” says IIEP’s briefing, ‘Six ways to ensure higher education leaves no one behind’. But even with issues of access, social stratification and societal inclusiveness put aside, there are worries as to whether most students, especially in Sub-Saharan Africa, are getting ready-to-work education.

The crux of the matter is that most countries in Sub-Saharan Africa, including Kenya, appear to have structural problems in creating employment for even the small number of their university graduates. According to the African Centre for Economic Transformation, 50 per cent of university graduates in the region are not expected to get jobs in the formal economy after graduation.

Such was the conclusion on Kenya that was recently arrived at by Dr Tristan McCowan, a specialist in global higher education at the University College London’s Institute of Education. In a recent study in which he collaborated with his colleague, Moses Oketch, a professor of international education policy and development, and Prof Ibrahim Oanda, the programme coordinator at the Dakar-based Council for the Development of Social Science Research in Africa (CODESRIA), findings indicate that while rates of absolute unemployment are lower than expected, many graduates in Kenya are in part-time employment and internships.

According to their study, ‘Towards a National Graduate Destinations Survey in Kenya’, in Kenyan context, it is not only just a question of lack of graduate-level jobs, but also of the quality of the workforce.

Quoting the World Bank’s enterprise surveys on Kenya as well as the Inter-University Council of East Africa’s report on higher education qualification gaps in the region, McCowan and his associates highlight the issue that a large number of firms continue to identify inadequately educated labour force as a major obstacle to business growth. Taking this into account, the question of which local universities are training for what is expected to continue being asked, not just by firms’ human resource managers, but also by students and their parents.

Prof Oanda says the labour market scenario will continue to define options for graduate employment. “The trend is currently pointing towards increased informalisation of graduate labour markets and casualisation of labour conditions in Kenya.” Painting a grim picture of graduate employment in Kenya, the study points out that 21 per cent of those with university qualifications are engaged in vulnerable jobs in jua kali sector. Still, there are concerns that expanding the higher education sector has not reflected skills required in the labour market.

Nonetheless, despite the severity of the problem, Cowan and his associates argue that as in most countries in Sub-Saharan Africa, in Kenya evidence on graduate employment is scarce. The issue is that national unemployment data sets are not available while still what constitutes employment status is rather ambiguous.

Cowan’s study, which was part of a larger research project, Universities, Employability and Inclusive Development 2013-2016, which aimed to promote the role of universities in graduate employability in Ghana, Kenya, Nigeria and South Africa, also points out that figures for higher education enrollments, dropout rates as well as completion rates reflecting the number of graduates emerging from universities are incomplete.

Although researchers found that open graduate unemployment was low in Kenya, it also emerged that recent graduates are not in ideal situation, regarding their occupations. Some insights were drawn from low salaries.

Asked why they had taken on their current job, 36 per cent of the graduates stated they were there just to gain and broaden their experience in order to get the type of job they really want. “No doubt this was one of the most striking evidence of the provisional nature of the current graduate employment in Kenya,” says the study.

Either, through wishful thinking, 90 per cent of the study respondents expressed unfinished business with their studies, as they told researchers that they intend to undertake further studies to upgrade their skills in order to obtain the employment that they desire.

But as Cowan has pointed out, whereas this aspiration may not translate into reality, it is a marker of an emerging credentialism and over-education in low-salaried graduate labour market in Kenya. It is also a pointer of universities not being concerned with what they teach or destinations of graduates, as many degree courses that are on offer seem to have no definite career paths.

According to African Economic Outlook 2017, which was released this week by the African Development Bank, many educated youths in Sub-Saharan Africa are at crossroads for lack of quality employment as a result of mismatch between the higher education curriculum and labour market needs.

So far, this is the situation in Kenya, putting to question as to why the society is investing in degrees and diplomas of too little value, whose holders are competing for jobs in the jua kali sector with basic education graduates.