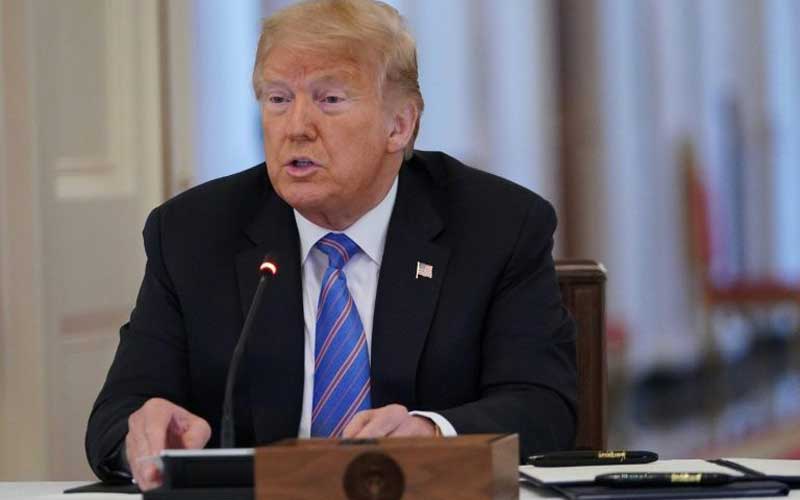 Donald Trump (pictured) received a written briefing about alleged Russian bounties offered to Afghan militants to kill American troops as early as February, The New York Times said Monday in a new report undercutting the US president's assertion that he was not told of the threat. Trump has come under increasing pressure to explain mounting media reports saying he was informed that Russian military intelligence had offered and paid cash to Taliban-linked militants for US soldiers' deaths -- and did nothing in response. The Times, citing two unnamed officials, said the claim had been included in a written version of the president's daily briefing in late February. CNN confirmed the story but cited an official saying the document was produced "sometime in the spring."

Trump has denied being informed of the assessment while the White House said Monday the claim had been kept from him because the intelligence underpinning it was unverified. The president is known for not regularly reading the daily brief, preferring to rely on conservative media reports on the day's big issues -- but he is reportedly orally briefed by intelligence officials up to three times a week. Crucially, the officials told the Times the Russia assessment was considered sufficiently serious and credible to include in a May 4 article in the CIA's classified World Intelligence Review, its flagship intelligence product. The White House briefed a small group of Republican lawmakers on its position Monday but top congressional Democrats have demanded that all members of Congress be briefed by the intelligence community. "The questions that arise are: was the president briefed, and if not, why not, and why was Congress not briefed," House Speaker Nancy Pelosi said in a letter to Director of National Intelligence John Ratcliffe and CIA director Gina Haspel.

The Times previously reported that US intelligence officers and special forces in Afghanistan began raising the alarm as early as January, and that the National Security Council (NSA) held an interagency meeting in late March to discuss possible responses -- but the White House didn't authorize any action. 'State sponsor of terrorism' "I am disgusted by Trump's incompetence," tweeted Tammy Duckworth, a former US Army helicopter pilot and combat veteran who is now a Democratic senator from Illinois. "He either didn't know that Russia was offering bounties for killing American troops or didn't care enough to remember a briefing that told him. Neither is acceptable for a Commander in Chief." Since the Times first broke the story on Friday, several American and British media outlets have reported the US intelligence conclusion that Russia offered cash incentives for dead US troops in Afghanistan.

The mushrooming scandal comes with Trump trying to withdraw troops from the conflict-torn country -- one of the Taliban's key demands -- and end America's longest war. Trump on Sunday denied having been briefed on the matter, as the reporting renewed questions about his reluctance to confront Russia over behavior that, if accurate, would represent a serious national security challenge. "Intel just reported to me that they did not find this info credible, and therefore did not report it to me or @VP," he tweeted. But even in Republican ranks, there were expressions of concern at the gravity of the allegations. "If intelligence reports are verified that Russia or any other country is placing bounties on American troops, then they need to be treated as a state sponsor of terrorism," said Thom Tillis, a Republican on the Senate Armed Forces committee, on Twitter. Ratcliffe and national security advisor Robert O'Brien condemned leaks to the media over the intelligence in statements late Monday. "Because the allegations in recent press articles have not been verified or substantiated by the intelligence community, President Trump had not been briefed on the items," O'Brien said. "Nevertheless, the administration, including the National Security Council staff, have been preparing should the situation warrant action." The suggestion that unverified security is not given to the president has been mocked by officials in previous administrations including Barack Obama's NSA spokesman Ned Price. "And since when is Trump briefed only on fully verified information? After all, his team made sure to tell him about the outlandish claim that his predecessor wiretapped Trump Tower!" he tweeted. Ratcliffe said unauthorized disclosures had jeopardized the effort to "ever find out the full story" behind the allegations. Meanwhile the Pentagon said in a statement it had "no corroborating evidence" for the allegations.