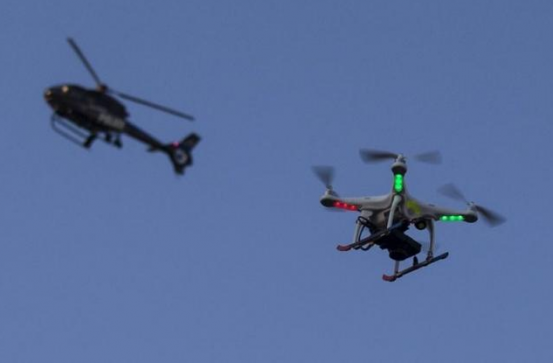 USA: As concerns rise about a security menace posed by rogue drone flights, US government agencies are working with state and local police forces to develop high-tech systems to protect vulnerable sites, according to sources familiar with the matter.

Although the research aimed at tracking and disabling drones is at an early stage, there has been at least one field test.

Last New Year's Eve, New York police used a microwave-based system to try to track a commercially available drone at a packed Times Square and send it back to its operator, according to one source involved in the test.

The previously unreported test, which ran into difficulty because of interference from nearby media broadcasts, was part of the nationwide development effort that includes the Department of Homeland Security, the Federal Aviation Administration and the Defense Department, the source said.

The sources were not authorized to speak about the effort and declined to be identified.

Asked about the development of counter-drone-technology, the Department of Homeland Security said it "works side-by-side with our interagency partners" to develop solutions to address the unlawful use of drones. Officials with the Defense Department, FAA and New York Police Department declined to comment.

But the sources acknowledged that efforts to combat rogue drones have gained new urgency due to the sharp rise in drone use and a series of alarming incidents.

The number of unauthorized drone flights has surged over the past year, raising concerns that one could hit a commercial aircraft during landing or take-off, or be used as a weapon in a deliberate attack, the sources said.

Drones have flown perilously close to airliners, interfered with firefighting operations, been used to transport illegal drugs into the United States from Mexico, and sparked a security scare at the White House, among other incidents.

But U.S. authorities have limited tools for identifying drone operators, many of them hobbyists, who violate federal rules that drones fly no higher than 400 feet (120 meters) and no closer than 5 miles (8 km) to airports. One reason for the enforcement gap is that Congress in 2012 barred the FAA from regulating recreational drones.

A system capable of disabling a drone and identifying its operator would give law enforcement officials practical powers to block the flights.

At crowded venues such as Times Square or the Super Bowl, police want to be able to take control of a drone, steer it safely away from the public and guide it back to the operators, who can then be identified, the sources said.

A Reuters analysis of FAA data shows that authorities identified operators in only one in 10 unauthorized drone sightings reported in 2014, while only 2 percent of the cases led to enforcement actions.

"We can’t shoot it out of the sky. We have to come up with something that's kind of basic technology so that if something happens, the drone or device will just go right back to the operators. It won't crash," one of the sources said.

To do that, experts say that a drone needs to be tracked and identified with a receiver and then targeted with an electromagnetic signal strong enough to overwhelm its radio controls.

“You need enough power to override the transmitter. If I just jam it so it can’t receive signals, it’s probably going to crash. But if I know the transmission codes the drone is using, I can control that object,” said retired U.S. Marine Lieutenant Colonel Muddy Watters, an electronic warfare expert.

Laws governing the use of drones have lagged their dramatic rise in areas spanning agriculture, filming and recreational use. Recreational drone operators are not required to register their machines, obtain training or put identifying features on the aircraft, making it extremely difficult for police to track down rogue operators.

In California, errant drones forced firefighters to suspend air drops of water and fire retardant on wild fires this summer.

In January, a "quadcopter" drone landed on the White House lawn after its operator lost control of the device in downtown Washington. Federal officials decided not to bring criminal charges.

Police say their greatest fear is weaponization, as the advance of drone technology enables the unmanned aerial vehicles (UAVs) to travel farther and faster and carry larger payloads.

Guns can be fixed to drones and fired with relative ease, as demonstrated in a popular video posted to YouTube by a Connecticut teenager in July. The 15-second video, entitled “Flying Gun”, shows a quadcopter hovering just above the ground in a wooded area and jerking backward with each of four shots.

The case is under investigation by the FAA to determine whether the drone violated aviation safety rules.

Safety and security concerns have prompted bipartisan discussions in Congress about options that include federal support for jamming drone systems and other potential technology solutions.

Senator Charles Schumer, a New York Democrat, proposed this week that drone manufacturers be required to install technology capable of preventing the unmanned aircraft from straying near “no fly” areas such as airports.

Drone industry executives say that one possible solution is an industry-wide agreement to include so-called “geo-fencing” software in drones to prevent them from straying above the legal altitude or too close to sensitive sites.

Chinese drone maker SZ DJI Technology Co Ltd, whose drone was involved in the January crash on the White House grounds, has since released a software fix that will restrict flights around sensitive areas.