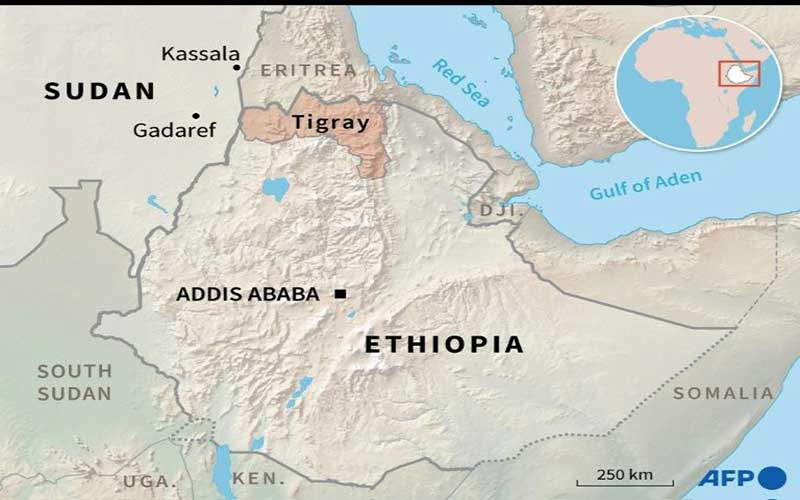 Prime Minister Abiy Ahmed said Thursday his army had made major gains in Ethiopia's north, where a week-old conflict has caused thousands to flee the country, stoking fears of a humanitarian crisis.

Abiy, the winner of last year's Nobel Peace Prize, last week sent troops and warplanes into the restive northern region of Tigray, whose ruling party Abiy blames for instigating a conflict many fear could spiral into a protracted civil war.

On November 4, Abiy accused the Tigray People's Liberation Front (TPLF) of attacking two federal military bases, which the party denies. A communications blackout in the region has made it difficult to verify competing claims on the ground.

In a Facebook post Thursday, Abiy said government forces had "liberated" the western zone of Tigray -- made up of six zones, plus the capital and surrounds.

Abiy also accused TPLF-aligned fighters of "cruelty", saying that when the army took control of the town of Sheraro they "found bodies of executed defence force personnel whose hands and feet were tied".

There was no immediate reaction from the TPLF, which dominated national politics for nearly three decades before Abiy took office in 2018.

Hundreds of Ethiopians in Addis Ababa donated blood on Thursday for troops fighting at the front, while authorities in the capital said grenades, guns and 4,000 rounds of ammunition had been seized in raids across the city.

"We have also arrested 242 individuals who had instructions to commit conspiracies from the anti-peace TPLF," city police commissioner, Getu Argaw was quoted by the Ethiopian Broadcasting Corporation as saying.

Long-running tensions between Abiy and the TPLF hit a new low in September when Tigray pressed ahead with its own elections, insisting Abiy was an illegitimate leader after national polls were postponed due to the coronavirus.

The conflict has seen multiple rounds of airstrikes targeting arms and fuel depots along with heavy fighting in western Tigray.

The UN says some 11,000 Ethiopians have sought refuge in neighbouring Sudan, which says it will house the influx in a camp for victims of a 1980s famine.

Exhausted refugees, mostly women, youths and children, arrived on foot or by bicycle and motorised rickshaw, a correspondent for AFP reported from the Hamdait border area of Sudan's eastern Kassala state.

Many sought shelter from the blazing sun in the shade of houses and cars, while hundreds more were waiting to cross a river in the border zone between the two countries.

Sudanese Prime Minister Abdalla Hamdok, quoted by state news agency SUNA as he hosted Eritrean Foreign Minister Osman Saleh, on Wednesday called for a "stop to the fighting as soon as possible" and a return to the negotiating table.

The African Union has also called for an immediate stop to fighting and for dialogue, as international concern mounts over the prospect of a long and bloody war in Africa's second most populous country.

But Ethiopia reiterated Thursday that the "cruelty" of the TPLF "cannot be addressed or redressed by sitting at a table for a negotiation".

"Negotiation makes sense only when there is good faith and a desire for peace," it said in a "context document" distributed by Abiy's office.

"The federal government is determined to enforce the rule of law in the region."

Lawmakers have approved a plan to install a "caretaker administration" in Tigray assuming the federal government can assert control over the region.

On Thursday they voted to lift the immunity of 39 TPLF members including Tigray regional president Debretsion Gebremichael, though the significance of the move was unclear given that TPLF MPs resigned en masse last month.

There are mounting worries about how Tigray's population is faring.

In a report published Wednesday, the UN's humanitarian affairs office warned that lack of relief access in Tigray means "food, health and other emergency supplies have no way to make it into the region".

It also noted "increasing concern for the protection of civilians against hostilities".

Abiy said on Facebook that "the army is giving humanitarian aid" in western Tigray.

William Davison, an analyst for the International Crisis Group, said the TPLF had "significant support" from the people and seeking to remove them would have serious ramifications.

"This means that there is likely to be considerable resistance to the intervention and that the efforts to remove the TPLF may well therefore end up harming the Tigrayan people," he said.

"The attack done by TPLF to our army is shameful for Ethiopia. Never happened in our history. We want to condemn this," said Adanech, who donated blood herself.

Addisu Tsehay, another donor, said he was saddened by the conflict but insisted the TPLF's provocations made fighting inevitable.

"Waging war at this time is not proper. War has no benefit for us. It hurts our economy, our country," he said.