Gambia’s Yahya Jammeh has agreed to step down  and leave the country, according to his successor President Adama Barrow.

President Adama Barrow made the announcement via social media, on his twitter handle saying, “I would like to inform you that Yaya Jammeh agreed to relinquish power and leave the country.” 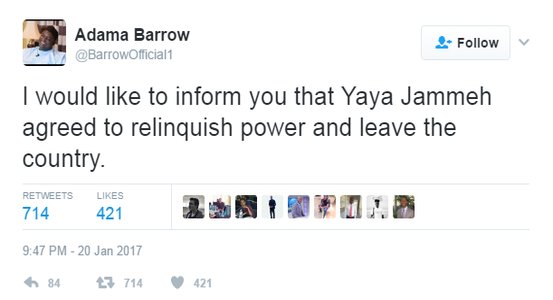 Barrow took the oath of office on Thursday at Gambia's embassy in Senegal, calling for international support from West Africa's ECOWAS bloc, the African Union and the United Nations.

After Jammeh, Gambians seek justice for the disappeared

The U.N. Security Council on Thursday backed ECOWAS's efforts to ensure Barrow assumes power, and the United States said it supported the intervention.

Weekend at One: A Gambian musician sings a happy tune on Jammeh's defeat

The Opposition has once again urged the electoral body to hire a reputable international firm to conduct a forensic audit of the voters register, which it says is compromised.