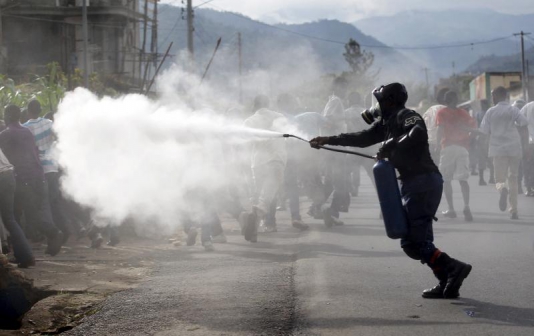 Freetown: Police fired guns and teargas on the headquarters of an opposition party and arrested supporters during celebrations for Sierra Leone's Independence Day on Wednesday, the party and police said.

Hundreds of people had gathered outside the headquarters of Sierra Leone People's Party (SLPP) to celebrate the holiday and the party's founding in 1951. The day is celebrated with carnival-like dances in the streets.

"We warned them not to come out with their masquerade because they did not have a permit to do so," police official Al Shek Kamara said.

Brima Koroma, an SLPP administrator, said the party had been denied the permit. The police had fired tear gas and live rounds, he said.

"They also ransacked our party office, roughed up and arrested some of our members," Koroma said.

Neither he nor the police said how many arrests had occurred. Police did not confirm that they had fired live rounds.

The clash took place two years before a presidential election. Supporters have urged President Ernest Bai Koroma to extend his mandate beyond his two-term limit, although he has denied through his spokesman that he had such a plan.

Uhuru Kenyatta: We have lost 1,879 compatriots to this pandemic

Kenyan banks' non-performing loans rose to 8 percent of the total in March from 5.7 percent in the same period last year, the central bank said.