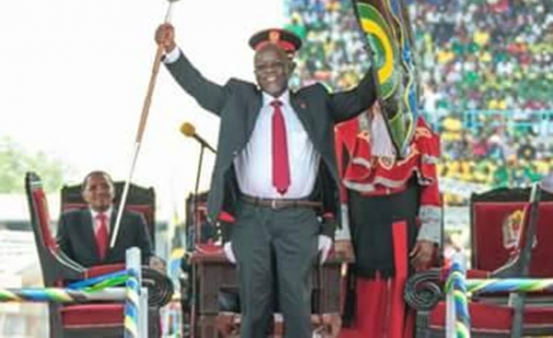 Magufuli's win in the October 25 poll with over 58 percent of votes cemented the long-running Chama Cha Mapinduzi (CCM) party's firm grip on power.

Vice-President Samia Suluhu Hassan, who comes from Zanzibar, was also sworn in at a stadium in the economic capital Dar es Salaam, an AFP reporter at the ceremony said.

Elections were largely peaceful, but the opposition said the vote was rigged and also claimed victory, while semi-autonomous Zanzibar -- which also voted for its own president -- annulled polls over irregularities.

Outgoing President Jakaya Kikwete has said he is "so happy" to be leaving his job after a decade in power, having stepped aside after serving his two-term limit.

On Zanzibar, opposition supporters on the Indian Ocean archipelago said they were "unhappy" that the mainland had pressed ahead with the swearing in ceremony.

Zanzibar's electoral commission ruled last week that the October 25 vote on the islands -- where the 500,000 registered voters also cast ballots for Tanzania's national president -- must be carried out again, citing "violations" of electoral law.

The annulment came after a key candidate, Seif Sharif Hamad of the opposition Civic United Front (CUF), declared himself the winner before the results were officially announced.

Homemade bombs exploded in Zanzibar town over the weekend. No one was wounded, but the explosions sparked concern on the islands, whose economy is dependent on foreign tourists.

An entrepreneurs’ mentorship programme is slated for December 18 to 21 at the Masai Mara, as a follow up to the Global Entrepreneurship Summit held in Nairobi in July this year.