A Reuters reporter in the town of Gevgelija on Macedonia's southern border with Greece said the flow of migrants and refugees - which has hit 1,500-2,000 per day - to the local railway station appeared to have suddenly stopped.

Interior Ministry spokesman Ivo Kotevski told Reuters that the "official border crossings are not shut". Authorities, however, may have moved to seal off illegal routes used by the migrants and refugees.

Kotevski said a state of emergency had been declared on the northern and southern borders and that soldiers would be brought in to help address a growing crisis.

Reuters reporters had earlier seen more than 1,000 Middle Eastern, African and Asian migrants and refugees - many of them Syrian - gathered in a dusty no-man's land between Greece and Macedonia, held back by Macedonian police overwhelmed by a dangerous crush at Gevgelija railway station for trains heading north to Serbia.

Kakuma, Dadaab refugee camps to be closed by June next year

Liverpool report pre-tax loss of Sh6.8 billion for 2019-20 amid pandemic

At the station, families slept in the open, before running and pressing to board the few trains leaving for Serbia, the last stop before Hungary and Europe's borderless Schengen zone. Hungary is racing to complete a fence along its 175-km border with Serbia to keep them out, threatening to create a bottleneck of tens of thousands.

Stung by scenes of chaos, of children squeezing through open carriage windows to escape the crush and men wielding sticks, Macedonia has sent riot police to Gevgelija to try to restore some semblance of order.

It appealed on Wednesday for neighboring countries to send train wagons to address the demand. But the United Nations refugee agency urged the government to do more, saying it should allocate a site to properly accommodate the migrants and refugees.

The problem may worsen with the possible arrival of thousands being evacuated by boat from the Greek island of Kos to the mainland after 21,000 people landed on Greek shores last week alone.

“Depending on how Greece uses ships to decongest the islands that will also temporarily increase the arrivals here,” said Alexandra Krause, Senior Protection Officer at the UNHCR in the Macedonian capital, Skopje.

“The (Macedonian) government needs to provide an appropriate site to be able to shelter the arrivals properly and to ensure sufficient assistance,” Krause told Reuters.

The only site currently being used is at the local police station, where Krause said the UNHCR had constructed some shelter with capacity for just 165 people. Krause said the Red Cross had access to the migrants and refugees in the border area but warned of harsher weather approaching. 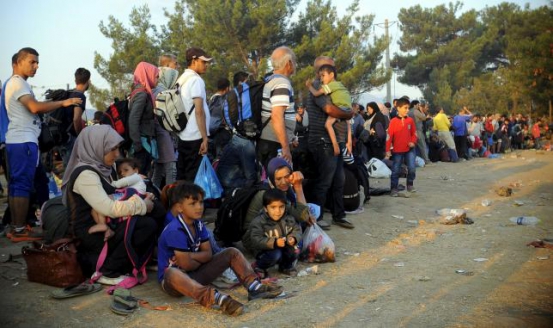 By Special Correspondent | 2 days ago

‘As leaders, we have failed our people’
Feedback